On Friday 22nd November 2013 I will be reading a paper at a fascinating conference on Insularity. Representations and Constructions of Small Worlds organised by the Department of German in the Faculty of Arts of the University of Malta between Thursday 21st and Saturday 23rd November. This is the conference website and here is the full programme of the conference. Special thanks from my side to Dr Kathrin Schoedel. 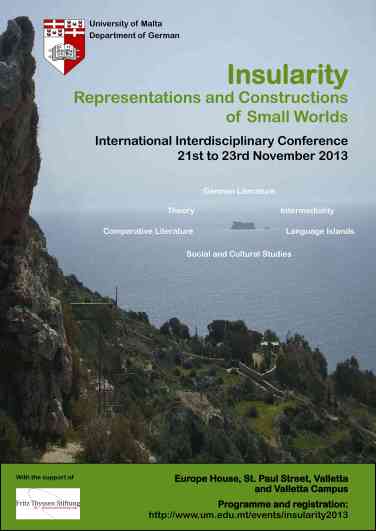 After having been shunned by the conservative literary and academic establishment for over fifty years, Juann Mamo’s irreverent novel about Grandma Venut’s migrant Children in America (Ulied in-Nanna Venut fl-Amerka) published in numbers in 1930-31 has become something of a cult novel that has inspired writers and music bands and has prompted a flurry of academic research. It’s the story of a group of uneducated Maltese emigrants who decide to head for New York to make it big and return to their island home to sit on their wealth, seemingly challenging the double insularity, Maltese and Mediterranean, that hampers their emancipation. But things go seriously wrong and the group, like many Maltese emigrants at the time, decide to return to their island home as poor and insular as ever. The only exception is Filiċ, an enlightened Labourite, who abandons the group and dissolves into the alien metropolis of New York. The author, Juann Mamo, proudly declares his debt to Cervantes’ Don Quixote, but the thematic affinities between the two narratives are not immediately clear: it is perhaps in their ambiguous relationship with insularity, their tendency to see foreign space as a mental extension of their village, that lies one of the parallels between the two narratives.

I will be reading my paper on Friday, 22nd November in a session entitled “Comparative Literature I: Departures and Arrivals – Migration, Travel, Interculturality” at the University’s Valletta Campus in St Paul’s Street between 11.30 am and 1.00 pm. The session will also feature papers by Richard Spiteri on “Laurent Ropa and Paul Achard: Second Thoughts on Colonial Encroachments” and Ulrich Hackenbruch on “Mind Maps – Concepts of Insularity in American Post-War Writing.”

Department of German, Faculty of Arts

The current discourse of globalisation may easily mask the fact that insular spaces still exist and are even multiplying. Growing poverty, limited migration and other forms of exclusion make insularity a highly topical issue despite the seeming interconnectedness among communities and nations. At the same time, in the cultural memory of various societies, the small world of the island is richly populated with fictions, myths, utopias, dystopias, images and metaphors.

The Malta conference is planned to be both international and interdisciplinary. It is going to explore the multi-faceted aspects of real as well as imaginary forms of insularity. The philosophical dimensions of the concept will be discussed, as well as its political, economic and social implications. The conference will also seek to address the metaphorical sense of seclusion and isolation associated with insularity. Contributions across disciplinary boundaries will analyse discursive constructions of insularity in various fields such as sociology, political sciences, geography and linguistics, as well as in literary and filmic fiction. 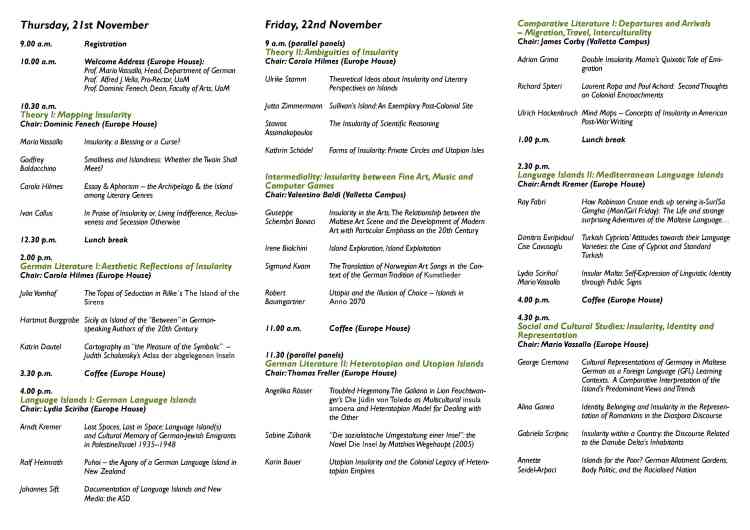